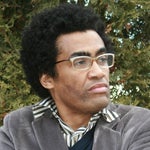 Photographer and poet Thomas Sayers Ellis received a MFA from Brown University in 1995. He is the author of Skin, Inc.: Identity Repair Poemsand his first collection The Maverick Room was awarded the John C. Zacharis First Book Award. His poems have appeared in numerous journals and anthologies, including The Open Door, Callaloo, Tin House, and Best American Poetry (1997, 2001, 2010). He is the recipient of a Whiting Writers Award and has been awarded residencies at the MacDowell Colony, the Fine Arts Work Center, and Yaddo. He teaches in the low-residency Creative Writing Program at Lesley University, and also works as a photographer for UFCW Local 342 in New York City. His photographs and photo essays have appeared in Poetry, Jubilat, and Transition. His exhibitions include “(Un)Lock It: The Percussive People in the GoGo Pocket” (The Gallery at Vivid Solutions in Washington, D.C.); “D.C. As I See It” (Leica Store/Gallery); and “Go-Go Swing” (The D.C. Commission on the Arts and Humanities). Mr. Ellis is the Poetry Editor of The Baffler and currently a Visiting Writer at the University of San Francisco in the Graduate Writing Program.

My father was an enormous man
Who believed kindness and lack of size
Were nothing more than sissified
Signs of weakness. Narrow-minded,

His eyes were the worst kind
Of jury—deliberate, distant, hard.
No one could outshout him
Or make bigger fists. The few

Who tried got taken for bad,
Beat down, their bodies slammed.
I wanted to be just like him:
Big man, man of the house, king.

A plagiarist, hitting the things he hit,
I learned to use my hands watching him
Use his, pretending to slap mother
When he slapped mother.

He was sick. A diabetic slept
Like a silent vowel inside his well-built,
Muscular, dark body. Hard as all that
With similar weaknesses

—I discovered writing,
How words are parts of speech
With beats and breaths of their own.
Interjections like flams. Wham! Bam!

An heir to the rhythm
And tension beneath the beatings,
My first attempts were filled with noise,
Wild solos, violent uncontrollable blows.

The page tightened like a drum
Resisting the clockwise twisting
Of a handheld chrome key,
The noisy banging and tuning of growth.

Literacy, Literature and Democracy | April 7, 2010
Writing (and Working) Beyond Genocide: Literary, Cultural and Social Activisms in a Changing Africa