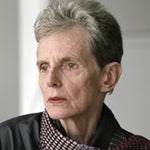 Susan Howe is the author of several books of poems and two volumes of criticism. Her most recent poetry collections are That This (New Directions, 2010) and The Midnight (2003). Her books of criticism include The Birth-Mark: Unsettling the Wilderness in American Literary History (1993), which was named an “International Book of the Year” by the Times Literary Supplement. She has received two American Book Awards from the Before Columbus Foundation and was elected to the American Academy of Arts and Sciences in 1999. In 1996 she was awarded a Guggenheim Fellowship and in the winter of 1998 she was a distinguished fellow at the Stanford Institute of the Humanities. In 2011, Howe received Yale University’s Bollingen Prize in American Poetry.

A longtime professor of English at the State University of New York at Buffalo, she held the Samuel P. Capen Chair of Poetry and the Humanities. Howe was elected a Chancellor of the Academy of American Poets in 2000. She lives in Guilford, Connecticut.

Day is a type when visible
objects change then put

on form but the anti-type
That thing not shadowed

The way music is formed of
cloud and fire once actually

concrete now accidental as
half truth or as whole truth

copy as to one aberrant
onward-gliding mystery

A secular arietta variation
Grass angels perish in this

harmonic collision because
non-being cannot be ‘this’

Not spirit not space finite
Not infinite to those fixed—

That this millstone as such
Quiet which side on which—