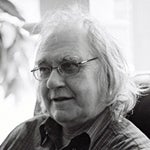 Avant-garde poet Steve McCaffery was born in 1947 in Sheffield, England. After spending his youth in the United Kingdom, he arrived in Toronto at the age of 21. Educated at the University of Hull, McCaffery met bpNichol and the two began to work on poetry that was new and unique to their age. In 1970, Nichol and McCaffery, along with two other Toronto-based poets, began the sound-poetry group The Four Horsemen. As a member of The Four Horsemen, McCaffery has published more than 23 books. McCaffery also holds a professorship at SUNY Buffalo (Amherst) and has been nominated twice for Canada’s Governor General’s Award.

Sentence not sentence, a read envelope, the rain stood up, the prolonged cosseting or a silhouette the customer knows, dead drunks arriving at a gate, these enormous movements of soap intact and called a breakdown on the road, winterthorn but a floating crow in flight, as secondary systems round the kitchen, a list of old socks, independent with dessert then pushing a chair to the left, setting this down well in advance of the middle limp before the brat, dawning night waned, a way of doing coke, binoculous interior on inspected coffee, when an ashtray’s cracked, an evanescent need to fill and putty travails on a tray, waking at eight to an echo, three means a half inch width, nine seven four two five, the cracking of spokes codes this distance, whispered vowels due to laxity, whole lengths of paragraphs in prose, passions building sounds, them and the name on a truck, all the tissues stick in mud, speech and conditions, an order given to the sentinel at ten, powder risks delays in daylight, earphones you might call shopping bags, going up in a plane and not coming down until wet, absinthe not absence, samovar through instance for white pills that rust easily, continuing to have a nice day, to read the fable of the bees, a knowledge of three reasons why a cold spoon works, another line that ends in sixteen yards, flashing lights and each with a separate gate, deer frisk sir freed, in a form of the future this past has expired, aperitif beyond the table and the postman sawing a thick oak log, the setting sun sent huge tints, deletion of the concept collage, a pot of bones before you freeze it, squeaks that last all day, it takes a word at random from a desk, these images of abstract needles thrown away, each neighbour complains of flowers in a vase, what the linguists call finesse, a telephoned farewell that issued from debunk, standing in the fifteenth century with an alabaster angel…