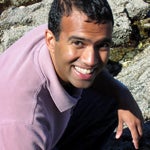 Chicago-native Srikanth Reddy is the author of the 2004 poetry collection Facts for Visitors. In addition to a MFA from the University of Iowa, Reddy has received fellowships from the Whiting Foundation, the Wisconsin Institute for Creative Writing, and the Mellon Foundation. The Poetry Foundation describes his poems as “collage-like in their variety and inclusiveness.”

Reddy is the literacy director for the Mahatma Gandhi Memorial Trust in Bhimavaram, Andhra Pradesh, India; and teaches in the creative writing program at the University of Chicago. His work has appeared in the anthologies Asian American Poetry: The Next Generation (2004) and Isn’t It Romantic: 100 Love Poems by Younger American Poets (2004).

I am about to recite a psalm that I know. Before I begin, my expectation extends over the entire psalm. Once I have begun, the words I have said remove themselves from expectation & are now held in memory while those yet to be said remain waiting in expectation. The present is a word for only those words which I am now saying. As I speak, the present moves across the length of the psalm, which I mark for you with my finger in the psalm book. The psalm is written in India ink, the oldest ink known to mankind. Every ink is made up of a color & a vehicle. With India ink, the color is carbon & the vehicle, water. Life on our planet is also composed of carbon & water. In the history of ink, which is rapidly coming to an end, the ancient world turns from the use of India ink to adopt sepia. Sepia is made from the octopus, the squid & the cuttlefish. One curious property of the cuttlefish is that, once dead, its body begins to glow. This mild phosphorescence reaches its greatest intensity a few days after death, then ebbs away as the body decays. You can read by this light.

–
From the Poetry Society of America