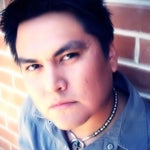 Originally from White Cone, Arizona, on the Navajo Reservation, Sherwin Bitsui holds a BA from the University of Arizona and an AFA in Creative Writing from the Institute of American Indian Arts. Bitsui received the 2010 PEN Open Book Award, an American Book Award, and a Whiting Writers Award. He has published his work in Narrative, Black Renaissance Noir, and The Iowa Review, among others. Bitsui is the author of Shapeshift and Flood Song. He currently lives in Tucson, Arizona.

When we are out of gas,
a headache haloes the roof,
darkening the skin of everyone who has a full tank.

I was told that the nectar of shoelaces,
if squeezed hard enough,
turns to water and trickles from the caribou’s snout.

A glacier nibbled from its center
spiders a story of the Southern Cross,
twin brothers
dancing in the back room lit with cigarettes
break through the drum’s soft skin—
There bone faces atlas
a grieving century.

–
From Shapeshift (The University of Arizona Press, 2003)