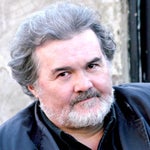 Sean O’Brien is a poet, critic, playwright, broadcaster, anthologist and editor who has written six collections of poetry. His titles include The Drowned Book, which won the Forward and T.S. Eliot prizes; Cousin Coat: Selected Poems 1976-2001 a book of essays, verse plays, and a verse translation of Dante’s Inferno, among others. He is Professor of Creative Writing at Newcastle University.

You are my secret coat. You’re never dry.
You wear the weight and stink of black canals.
Malodorous companion, we know why
It’s taken me so long to see we’re pals,
To learn why my acquaintance never sniff
Or send me notes to say I stink of stiff.

But you don’t talk, historical bespoke.
You must be worn, be intimate as skin,
And though I never lived what you invoke,
At birth I was already buttoned in.
Your clammy itch became my atmosphere,
An air made half of anger, half of fear.

And what you are is what I tried to shed
In libraries with Donne and Henry James.
You’re here to bear a message from the dead
Whose history’s dishonoured with their names.
You mean the North, the poor, and troopers sent
To shoot down those who showed their discontent.

Be with me when they cauterise the facts.
Be with me to the bottom of the page,
Insisting on what history exacts.
Be memory, be conscience, will and rage,
And keep me cold and honest, cousin coat,
So if I lie, I’ll know you’re at my throat.