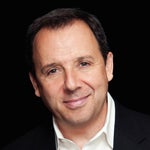 Ron Suskind is a Pulitzer Prize-winning journalist and author who has written some of America’s most important works of nonfiction, including the fall’s New York Times bestseller, Confidence Men: Wall Street Washington and the Education of a President. He is also the author of bestsellers including, The Way of the World: A Story of Truth and Hope in an Age of Extremism; The One Percent Doctrine: Deep Inside America’s Pursuit of its Enemies Since 9/11; The Price of Loyalty: George W. Bush, the White House and the Education of Paul O’Neill; and A Hope in the Unseen: An American Odyssey from the Inner City to the Ivy League.

From 1993 to 2000, he was the senior national affairs reporter for the Wall Street Journal, where he was awarded the 1995 Pulitzer Prize for Feature Writing. He currently writes for various national magazines, including The New York Times Magazine and Esquire Magazine.

There’s a videotape I have a problem with.

It’s of a toddler running through fallen leaves with a Nerf sword. The time code is OCTOBER 1993. The boy runs like kids do at that age, about two and a half, with a reckless, headlong wobble that will soon be gone. We know this because, by late in the image-drenched twentieth century, we know how things are supposed to look, and can read all manner of inference into the moving landscape, most of it spot-on. He’s a wide-eyed, curly-haired boy, clad in green cords and a brightly colored winter jacket; tree types and topography suggest the northeastern United States; the leafy yard is behind a smallish home, thought the swing set is elaborate–grand and spanking new, a sign of young parents trying too hard. The kid is being chased by a boyish, dark-haired man who’s laughing and holding a small stick as he knee-slides into the leaves, prompting the boy to turn, smiling and ready to fight. As they cross swords, the man says, “He’s not a boy, he’s a flying devil!” in a passable imitation of Captain Hook from Disney’s Peter Pan.

Blueprint for Accountability | March 27, 2012
The Morning After