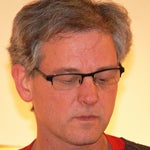 Rod Smith’s latest collection, Deed, was published by The University of Iowa Press in the fall of 2007. He is also the author of Music or Honesty, Poèmes de l’araignée (France), In Memory of My Theories, The Good House, The Boy Poems, and Protective Immediacy. A CD, Fear the Sky, came out from Narrow House Recordings in 2005. Smith’s work has appeared in numerous magazines and anthologies including American Hybrid: A Norton Anthology of New American Poetry, Anthology of New (American) Poets, The Baffler, The Gertrude Stein Awards, Java, New American Writing, Open City, Poésie, Poetics Journal, Shenandoah, and The Washington Review. He edits Aerial magazine, publishes Edge Books, and manages Bridge Street Books in Washington, DC. Smith is also editing, with Peter Baker and Kaplan Harris, The Selected Letters of Robert Creeley, for the University of California Press.

If a lion could speak, we would not understand him.
—Wittgenstein

Listen to the lion. Like
an owl in the
heaped instant
oil-death craft, my love
my driftwood my
Susquehana deckhand
disturbance, so sad, printed
into everything taken.
That enormous bandaged
boundary behind
the open muffling
Is to be filled rain
envisioned, tall
fear rim peopled &
transmuting different
bunk in us “surrounding
a little bird-buddha”
in an ad for an ad for
Listen to the lion. Biological
crank turned by burned
sausage into the vacuum
of affirmation where my
oft inner floated mesquite
self’s Ismene suddness
is known spirals sleep and
clear. No roads can show
the middle eye something
other objects shot into
the sky. When giving.
No tactile surface
is stone moist to the
toned raking Paris
you wish. The sun
has several names, like
Sherman, Tazmo, Bonk,
& Harmine– it’s risen
raves retake Atlanta
from nothingÕs lost
laundry room key &
we, clean in those
clothes have regone
there, we’ve done
a hell of a job.
thank you. We’ve
done exactly what
was expected of
us. & we
are not dead. 6
tabs re-side baste
& coax ton’s opera-knuckle
brisket. Pal 1
is the cloned guy, &
loosely they have
or will have nice
copulated currency, as
if a tusk warranted Suzuki,
as if, portly
a re-stained tore heart’s
made timing looked
back in tears over this
strange be.