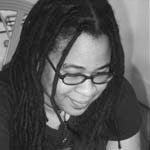 Renee Gladman is author of four works of prose, most recently To After That (TOAF), and one collection of poetry. She is editor and publisher of Leon Works, an independent press for experimental prose and other thought-projects based in the sentence, with occasional forays into poetry, and teaches in the Literary Arts Program at Brown University.

Officials pursue activists over rocky terrain in
search of answers. “We want to make sure anger
does not ruin these kids,” Daniel Sharpe of the
Brendan Seize Unit (BSU) confides, “but it’s like
pushing against water.”

Investigators combed shards from the collapsed
bridge for signs that it had been blown apart. “I
have a feeling that Monique Wally and her group
are behind this. What we have is a smell of iron
burning, but no visual evidence on site.” Sharpe
and his BSU team have joined with local police
and the FBI to solve the encrypted crime.

“Only the time of day distinguishes these so-
called dissidents from terrorists. Had they blown
that bridge an hour earlier or an hour later, we
would have had a lot of death on our hands.”

The bridge remains in tact today, despite reports
that it is long gone. A team of specialists from
the Institute of Explosive Applications in
Toronto, Ontario is expected to settle the mat-
ter by mid-week. “These scientists are the elite
among their field. We have every faith that they
will acknowledge the violence done to the
bridge,” the President assured viewers today.