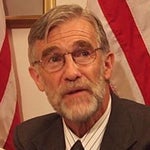 Retired CIA analyst turned political activist, Ray McGovern chaired the National Intelligence Estimates in the 1980s, prepared daily briefs for Presidents John F. Kennedy to George H.W. Bush, and received the Intelligence Commendation Medal, which he returned in 2006 in protest of the CIA’s involvement in torture. He founded the Veteran Intelligence Professionals for Sanity, an organization committed to analyzing and criticizing the use of intelligence, in 2003.