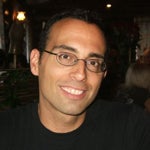 Born in San Diego, Philip Metres grew up in the suburbs of Chicago. Since receiving a Ph.D. in English and an M.F.A. in creative writing from Indiana University in 2001, Metres has written and translated a number of books and chapbooks, including Sand Opera (2015), I Burned at the Feast: Selected Poems of Arseny Tarkovsky (2015), abu ghraib arias (2011), Ode to Oil (2011), Primer for Non-Native Speakers (2004), and A Kindred Orphanhood: Selected Poems of Sergey Gandlevsky (2003).

He is a professor of English at John Carroll University in Cleveland, where he lives with his wife Amy and two daughters.

That we await a blessed hope, & that we will be struck
With great fear, like a baby taken into the night, that every boot,

Every Kevlar & suicide vest & unpiloted drone raining fire
On wedding parties will be burned as fuel in the dark season.

The constant wakefulness of God, alongside the sweet scalp
Of God, the contented murmur of God, the limb-twitched dream-

Reaching of God. We’re dizzy in every departure, limb-lost.
We cannot sleep in the wake of God, & God will not sleep

The infant dream for long. We lift the blinds, look out into ink
For light. My God, my God, open the spine binding our sight.