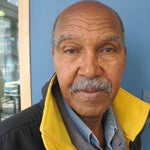 Nuruddin Farah is a prominent Somalian writer. He is the author of over 10 books. Farah did his studies mostly in both India and England. He was born in 1945 in Baidoa in southern Somalia, what is currently known as the Republic of Somalia. However, he grew up in Ogaden, a province of Ethiopia near Somalia. He was the first writer to break with the Somali oral tradition, and his work, which he does in English, is translated into a dozen languages. Today still, Farah is considered one of the most important writers in Africa. He teaches an intensive summer seminar at the European Graduate School (EGS).

Cambara waits for him to push the door shut, which he does with a squeak, and she watches him as he turns the wobbly handle a couple of times in a futile effort to secure it, notwithstanding its state of malfunction. Meanwhile, she reminds herself that it has been years since she last set eyes on him or was in touch with him directly. Arda has carried words back and forth from one to the other and has persuaded her daughter to put up with him, at least for the first few days, since Cambara informed her of her wish to go to Mogadiscio. At her mother’s cajoling, Cambara acquiesced to stay with “her blood,” as she put it, for the first few days, until, perhaps, she has made her own contacts with a close friend of a friend living in Toronto. No doubt, Cambara cannot expect her mother to recall her nephew’s malodorous breath, nor is it fair to assume that this is reason enough to warrant her daughter’s not wanting to share the same space. But how on earth could she, Cambara, have forgotten the awfulness of it, so vile it is sickening? Nor had she known him to be a chain-smoker or a constant chewer of qaat, the mild narcotic to which urban Somalis are highly addicted.