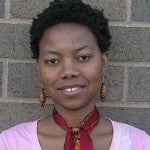 NoViolet Bulawayo was born and raised in Zimbabwe. She recently completed her MFA at Cornell University in the U.S., where she is now a Truman Capote Fellow and Lecturer of English. In addition to winning the 2011 Caine Prize for “Hitting Budapest,” NoViolet was shortlisted for the 2009 SA PEN/Studzinski Literary Award for her story “Snapshots.” Her work has appeared in Callaloo, Boston Review, the Warwick Review, Newsweek, as well as in anthologies in Zimbabwe, South Africa and the United Kingdom.

We are on our way to Budapest: Bastard and Chipo and Godknows and Sbho and Stina and me. We are going even though we are not allowed to cross Mzilikazi Road, even though Bastard is supposed to be watching his little sister Fraction, even though mother would kill me dead if she found out; we are going. There are guavas to steal in Budapest, and right now I’d die for guavas, or anything for that matter. My stomach feels like somebody just took a shovel and dug everything out.

Getting out of Paradise is not so hard since the mothers are busy with hair and talk. They just glance at us when we file past and then look away. We don’t have to worry about the men under the jacaranda either since their eyes never lift from the draughts. Only the little kids see us and want to follow, but Bastard just wallops the naked one at the front with a fist on his big head and they all turn back.

We are running when we hit the bush; Bastard at the front because he won country-game today and he thinks he rules, and then me and Godknows, Stina, and finally Chipo, who used to outrun everybody in Paradise but not anymore because her grandfather made her pregnant. After crossing Mzilikazi we slither through another bush, gallop along Hope Street past the big stadium with the glimmering benches we’ll never sit on. Finally we hit Budapest. We have to stop once for Chipo to rest….