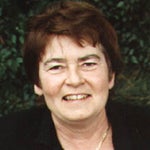 French Canadian formalist poet and novelist Nicole Brossard was born in 1943 in Montreal. She has published over 30 works of poetry and fiction, including Notebook of Roses and Civilization and Installations, as well as pieces she edited. Brossard founded the publishing house L’Intégrale éditrice in 1982. She attended the Université de Montréal and has received numerous awards, among them, the Prix Athanase-David and two awards from the Governor General. Nicole Brossard is a member of the Canadian national order.

Smooth Horizon of the Verb Love

focus on yes, on the woman’s
eyelids
caress not silence not word
focus beyond. Hold me back