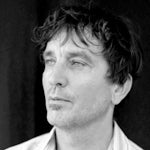 Nick Flynn was born and raised in Scituate, Massachusetts. Flynn has written poetry, memoirs, textbooks and a play. His Another Bullshit Night in Suck City, won the PEN/Martha Albrand Award for the Art of the Memoir and has been translated into ten languages. His poetry has garnered him the PEN/Joyce Osterweil Award in addition to fellowships from The Guggenheim Foundation, The Library of Congress, and The Amy Lowell Trust. Flynn’s work has appeared in The New Yorker, the Paris Review, National Public Radio’s This American Life, and The New York Times Book Review.

unlike you and I jesus knew he’d die

some days a headache woke him it

lingered nothing terrible but the word

& that bothered him sometimes & then

he’d do one of his little bootleg tricks

what the hell, didn’t hurt anyone

didn’t make anyone disappear for-

ever but the tricks stopped working he forgot

why he did them & what for he confused

a story about a guy named jesus

with a story about a father he never knew

& it all began to hang like a motheaten coat

pulled out of a trunk on shaky days hey let’s

return to the scene of the fucken tragedy at least

we all know how it turns out instead of this end-

little papers you trade for your sins,

what do you call them? anyone? no?)

god of nickel god of dime

right, the real jesus he was lost he walked in-

to the desert not far really his friends his

disciples he told them he’d come back

like us he said this every time he left but jesus

his flesh jesus never asked anything as far

as I can tell he got tired everyday & then slept

bearable, the dreams, the father

pointing a finger at everyone a finger we can’t