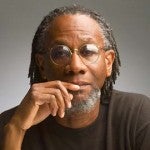 Poet and novelist Nathaniel Mackey was born in 1947 in Miami, Florida. He received a BA from Princeton University and a PhD from Stanford University. His books of poetry include Splay Anthem, which won the 2006 National Book Award in Poetry. He is also the author of an ongoing prose work, From A Broken Bottle Traces of Perfume Still Emanate, of which three volumes have been published. He is the co-editor of American Poetry: The Twentieth Century (2000), and he edits the magazine Hambone. His honors include a Whiting Writer’s Award, a Guggenheim fellowship and the 2014 Ruth Lilly Prize. Mackey served as a Chancellor of The Academy of American Poets from 2001 to 2007, and is the Reynolds Price Professor of English at Duke University.

From Said to Have Been Heard to Say Hush

Remembered moment lamenting
its exit, the anaphylactic aria
fell away. What beauty promised or
we projected faded, we moved
on,
not’s province the place we
now camped in… The abandoned
ones we averred we’d someday
be
fell away as well. The abandoned
girl and boy blended in… Thought’s
province it was we pitched our tents
in.
Wind wrinkled our foreheads, though
not’s not someday… Not made every
eye water. In our heads more than ever,
syl-
labic beads we thumbed, not’s dread
have-without-hold we bowed down to,
cried Cry blood, fell back… There
was a box inside my head, something
men-
acing shook it, Joe Henderson’s tenor.
Not’s woken-up-to now we backed away
from, Little Johnnie C, “Hobo Joe”…
In-
sistent, imposed itself, beside the point.
All of it was orphan song we chimed in
on, chided by it, charmed even so. I saw
no
light bust said otherwise, lit by the thought
of it, not-light lytic, tear between said
and saw… Light stole away, some kind
of
spell I was under. At more removes
that there was ground for, I stole away
as well, said to have been heard to
say hush. A tiptoe ghost octet fidgeted
be-
hind us. Not was another name for
death I was afraid and afraid my feet
would fail, Idiot Footless, feet I did
in-
deed speak with, did indeed say hush…
A little bit of nothing, anaphylactic
rush, seen-say gone so soon we were
not’s
understudies. Whatever it was we did,
no matter what we did, whatever we did we
did away… No one heard footsteps, no
feet
struck the dirt. Earth beset by see-thru
sleep, transparent footprint, sleepwalk’s
his and hers an it club of late, the aban-
doned his and hers run come… In back
of
us the ghost octet ept at it, thread on
the box and on the backs of our necks,
hair stood on the backs of our necks.

—
Continue reading “Said to Have Been Heard to Say Hush” at Poets.org.