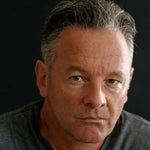 Robertson is the first poet to have won all three categories in the Forward Prize. Born in Perthshire and raised along the northeast coast of Scotland, Robertson now resides in London.

Rain, you said, is silence turned up high.
It has been raining now for days.
Even when it stops
there is still the sound
of rainwater, labouring
to find some way into the ground.

We lie in grim embrace: these
two halves trying to be whole, straining
for this break in the static,
in the white noise
that was rain falling
all day and all through the sheeted night.

Silence is rain with the sound turned down,
and I stare out now on a clear view
of something left out the line:
a life, snagged there —
drenched, shrunken,
unrecognisably mine.