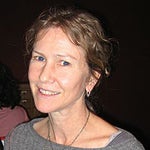 Cole Swensen was born in 1955 in Kentfield, California. Her collections of poetry include New Math (1988), which won the National Poetry Series; Noon (1997); Try (1999), which won the Iowa Prize and The San Francisco State Poetry Center Book Award; Goest (2004), which was a finalist for the National Book Award; and The Book of a Hundred Hands (2005). Her most recent book is The Glass Age (2007), which looks at Pierre Bonnard’s window paintings in the contexts of the history of glass and the fragility of the contemporary world.

Swensen received her B.A. and M.A. from San Francisco State University and a Ph.D. in Comparative Literature from the University of California, Santa Cruz. She is a translator of contemporary French poetry, prose, and art criticism; she has published translations of books by writers such as Pierre Alferi, Olivier Cadiot, and Suzanne Doppelt, and her translation of Jean Frémon’s Island of the Dead won the 2004 PEN Center USA Award in Translation. She is the founder and editor La Presse, a small press that publishes contemporary French poetry translated by English-language poets, and she is the co-editor, with David St. John, of the upcoming Norton anthology of contemporary poetry, American Hybrid. A recipient of a 2006 Guggenheim Fellowship, she divides her time between Washington D.C., Paris, and Iowa, where she teaches at the Iowa Writers’ Workshop.

Green moves through the tops of trees and grows
lighter greens as it recedes, each of which includes a grey, and among the
greys, or beyond them, waning finely into white, there is one white spot,
absolute; it could be an egret or perhaps a crane at the edge of the water
where it meets a strip of sand.

There is a single, almost dazzling white spot of a white house out loud
against the fields, and the forest in lines
receding, rises,
and then planes. Color,

in pieces or entire; its presence
veneers over want; in all its moving parts, it could be something else

half-hidden by trees. Conservatory, gloriette, gazebo, or bandshell,
a door ajar on the top floor.