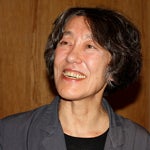 Mei-mei Berssenbrugge was born in Beijing and grew up in Massachusetts. She is the author of twelve books of poetry. Her selected poems, I Love Artists, was published by the University of California Press in 2006. A collaboration with artist Kiki Smith, Concordance, was recently published by the Rutgers Center for Innovative Paper and Print and in a trade edition from Kelsey Street Press. She lives in rural New Mexico and New York City.

People think, at the theatre, an audience is tricked into believing it’s looking at life.

The film image is so large, it goes straight into your head.

There’s no room to be aware of or interested in people around you.

Girls and cool devices draw audience, but unraveling the life of a real human brings the
outsiders.

I wrote before production began, “I want to include all of myself, a heartbroken person
who hasn’t worked for years, who’s simply not dead.”

Many fans feel robbed and ask, “What kind of show’s about one person’s unresolved
soul?”

Having limbs blown off is some person’s reality, not mine.

I didn’t want to use sympathy for others as a way through my problems.

There’s a gap between an audience and particulars, but you can be satisfied by
particulars, on several levels: social commentary, sleazy fantasy.

Where my film runs into another’s real life conditions seem problematic, but they don’t
link with me.

The linking is the flow of images, thwarting a fan’s transference.

If you have empathy to place yourself in my real situation of face-to-face intensity, then
there would be no mirror, not as here.