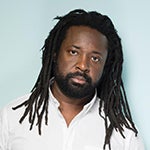 From A Brief History of Seven Killings

Dead people never stop talking. Maybe because death is not death at all, just a detention after school. You know where you’re coming from and you’re always returning from it. You know where you’re going though you never seem to get there and you’re just dead. Dead. It sounds final but it’s a word missing an ing. You come across men longer dead than you, walking all the time though heading nowhere and you listen to them howl and hiss because we’re all spirits or we think we are all spirits but we’re all just dead. Spirits that slip inside other spirits. Sometimes a woman slips inside a man and wails like the memory of making love. They moan and keen loud but it comes through the window like a whistle or a whisper under the bed, and little children think there’s a monster. The dead love lying under the living for three reasons. (1) We’re lying most of the time. (2) Under the bed looks like the top of a coffin, but (3) There is weight, human weight on top that you can slip into and make heavier, and you listen to the heart beat while you watch it pump and hear the nostrils hiss when their lungs press air and envy even the shortest breath. I have no memory of coffins.