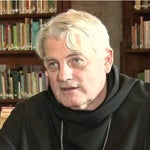 Mark Patrick Hederman is Abbot of Glenstal Abbey in Limerick. A former headmaster of Glenstal Abbey School, his doctorate was in the philosophy of education. He studied philosophy and theology in Paris with a special interest in Emmanuel Levinas. From 1976 to 1984 he and Richard Kearney edited The Crane Bag Journal of Irish Studies. His theme is the connection between art and religion.

Abbot Hederman is author of ten books since the turn of the century, most notably The Haunted Inkwell (2001). More recent titles include Underground Cathedrals (2010) and Dancing with Dinosaurs: A Spirituality for the 21st Century (Columba Press, Dublin, 2011).

The word for a ‘province’ in Irish is ‘fifth.’
The fifth one: Meath or ‘middle’ place,
is secret: a drawer, or priest-hole,
Omphallos
a sliding door oiled into space
rock-faced, as in sheer of cliff.
‘We’ll find them,’ callow children laughed
on mid-term breaks
in plastic macs.
‘Don’t drive. We’ll walk.’
They held a compass: North, North-West
and tied a thread to leave a trail.
We found one body in a field
metal-detected teeth through lime
walking-shoes out on a ledge.
One child survived. Now ninety-nine
one plain, one purl, hand-knitted
time of sorrow. For
‘Wherever you walk in Ireland
you reach the edge.’