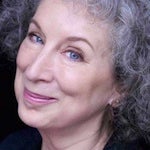 Margaret Atwood was born in 1939 in Ottawa and grew up in northern Ontario, Quebec, and Toronto. She is the author of more than fifty volumes of poetry, children’s literature, fiction, and non-fiction and is perhaps best known for her novels, which include The Edible Woman (1970), The Handmaid’s Tale (1983), The Robber Bride (1994), Alias Grace (1996), and The Blind Assassin, which won the prestigious Booker Prize in 2000. Her most recent volume of poetry, The Door, was published in 2007. Her non-fiction book, Payback: Debt and the Shadow Side of Wealth, part of the Massey Lecture series, appeared in 2008, and her most recent novel, The Year of the Flood, in the autumn of 2009. Atwood’s work has been translated into over 40 languages.

from Payback: Debt and the Shadow Side of Wealth

“The trickle-down theory of economics has it that it’s good for rich people to get even richer because some of their wealth will trickle own, through their no doubt lavish spending, upon those who stand below them on the economic ladder. Notice that the metaphor is not that of a gushing waterfall but of a leaking tap: even the most optimistic endorsers of this concept do not picture very much real flow, as their language reveals.”

Blueprint for Accountability | April 2, 2012
Payback: Debt and the Shadow Side of Wealth