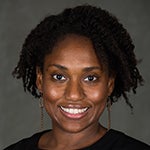 Marcia Chatelain is Associate Professor of History and African American Studies at Georgetown University. The author of South Side Girls: Growing up in the Great Migration (Duke University Press, 2015), Chatelain is a public voice on the history of African American children, race in America, as well as social movements. In 2014, Chatelain organized her fellow scholars in a social media response to the crisis in Ferguson, Missouri, entitled #FergusonSyllabus. #FergusonSyllabus has led to similar initiatives online and has shaped curricular projects in K-12 settings, as well as academia. A frequent public speaker and consultant to educational institutions, Chatelain delivers lectures and workshops on inclusive teaching, social movements, and food justice. Chatelain has contributed to TheAtlantic.com, Time.com, Ms. Magazine, and The Chronicle of Higher Education, and she has also been quoted in articles in the New York Times, the Chicago Tribune, the Washington Post, and the Chronicle of Higher Education; she has appeared on local television and national outlets including C-SPAN, MSNBC, CNN, BBC-America, and PBS. Chatelain hosts, “Office Hours: A Podcast,” in which she talks to millennials about what is most important to them. Chatelain is a proud graduate of the University of Missouri-Columbia, where she was a Harry S. Truman Scholar, and she holds a Ph.D. in American Civilization from Brown University. In 2016, Chatelain was named a “Top Influencer in Higher Education,” by the Chronicle of Higher Education. She is currently the Eric and Wendy Schmidt Fellow at the New America Foundation in Washington, D.C. During the 2017-2018 academic year, Chatelain will be on leave from Georgetown as a National Endowment for the Humanities Fellow.

From How to Teach Kids About What’s Happening in Ferguson

When the unrest in Ferguson erupted, my husband made an observation that broke my heart: “The kids were supposed to start school today.”

For me, the perfume of synthetic fibers and freshly sharpened pencils always signals the start of a new school year, and it makes me ecstatic. As a child, the ritual began with a trip to the uniform store. My older sister and I trekked onto Clark Street via a city bus. Each year, we found ourselves before the counters of what had to be the world’s largest purveyor of Catholic school uniforms. “St. Margaret Mary, please,” we would say. The elderly salesman would fetch my mostly polyester wardrobe for the upcoming school year—a plaid jumper, pleated skirts, Peter Pan-collared blouse, acrylic cardigans—carefully folded in individual plastic bags.

I loved the preparations for the first day of school so much that I became a college professor. I’ve spent most of my 34 Augusts anticipating a school year.

Continue reading “How to Teach Kids About What’s Happening in Ferguson” at The Atlantic.