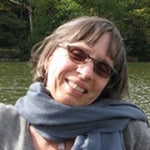 Laura Moriarty was born in St. Paul, Minnesota, in 1952. She has published eleven books of poetry, a short novel, Cunning (2000), and a novel of science fiction, Ultravioleta (2006), described by Publisher’s Weekly as “sweet Borges-like thought experiments meet Philip K. Dick paranoia, with strands of science fiction, romance, pulp noir, fairy tale and the American road novel…this mission is as keenly ambitious as it is successful.”

Her most recent books of poetry are Self-Destruction (2004) and A Semblance: Selected & New Poetry 1975-2007 (2007). She received a Poetry Center Book Award in 1984 for her collection, Persia (1983). She has also been awarded a Gerbode Foundation grant, a residency at the Foundation Royaumont in France, a New Langton Arts Award in Literature and a grant from the Fund for Poetry. Moriarty has taught at Mills College and Naropa University, among other places, and from 1986-1997 she was Archives Director at the American Poetry Archives at the Poetry Center at San Francisco State University. She is currently Deputy Director of Small Press Distribution in Berkeley, California.