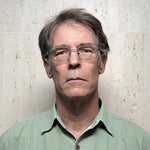 Kim Stanley Robinson is an American science fiction writer, probably best known for his award-winning Mars trilogy. He has been widely acclaimed by readers and critics since the beginning of his career, and is considered by many to be one of the finest living writers of science fiction. His work delves into ecological and sociological themes regularly, and many of his novels appear to be the direct result of his own scientific fascinations, such as the 15 years of research and lifelong fascination with Mars which culminated in his most famous work. He has, due to his fascination with Mars, become a member of the Mars Society. His major novels are: The Wild Shore (1984), The Gold Coast (1988) and Pacific Edge (1990) (The California Trilogy), Red Mars (1993), Green Mars (1994), and Blue Mars (1996) (the Mars Trilogy), Forty Signs of Rain (2004), Fifty Degrees Below (2005) and Sixty Days and Counting (2007) (the Washington Trilogy).

Terminator rolls around Mercury just like its sunwalkers, moving at the speed of the planet’s rotation, gliding over twenty gigantic elevated tracks, which together hold aloft and push west a town quite a bit bigger than Venice. The twenty tracks run around Mercury like a narrow wedding band, keeping near the forty-fifth latitude south, but with wide detours to south and north to avoid the worst of the planet’s long escarpments. The city moves at an average of five kilometers an hour. The sleeves on the underside of the city are fitted over the track at a tolerance so fine that the thermal expansion of the tracks’ austenite stainless steel is always pushing the city west, onto the narrower tracks still in the shade. A little bit of resistance to this movement creates a great deal of the city’s electricity.

From the top of the Dawn Wall, which is a silvery cliff forming the eastern edge of the city, one can see the whole town stretching out to the west, green under its clear dome. The city illuminates the dark landscape around it like a passing lamp; the illumination is very noticeable except at those times when high cliffs west of the city reflect horizontal sunlight into town. Even these mere pinpricks of the dawn more than equal the artificial lights inside the dome. During these cliffblinks nothing has a shadow; space turns strange. Then the mirrors are passed; that light fades. These shifts in illumination are a significant part of the sensation of movement one has in Terminator, for the glide over the tracks is very smooth. Changes in light, slight tilts in pitch, these make it seem as if the town were a ship, sailing over a black ocean with waves so large that when in their troughs, the ship drops into the night, then on high points crests back into day.