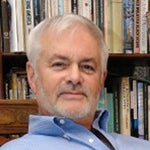 Ken McCullough’s publications include Left Hand (2005), Obsidian Point (2003), Sycamore-Oriole (1991), and Travelling Light (1987). He has received numerous awards for his poetry, including a National Endowment for the Arts fellowship and grants from the Witter Bynner Foundation for Poetry, the Iowa Arts Council, and the Jerome Foundation. He has translated U Sam Oeur’s literary work, including the poetic volume Sacred Vows and the memoir Crossing Three Wildernesses. McCullough lives in Winona, Minnesota, with his wife and son.

Line in the Sand

What he said was vast, given his limits.
At some mojave of the soul, we stopped
to gas up, and I was inclined to bolt—
wrong look, wrong answer, might raise his demons,
but what did I know, who was I to say?
He tuned Tom Harmon on the radio,
sneered and nodded like a slow woodpecker—
“Would that they had broke the mold,” he chuckled
with sand in his pipes. The sun had stumbled.
His eyes turned on me—”What’ll it be, rook?
Only one of us will walk away, son.”
He coughed, spat. “Are you in or are you out?
If you think you are fast enough, just once,
you might have a blind salamander’s chance.”