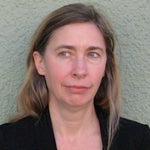 Critic, editor, and poet Juliana Spahr earned her BA from Bard College and PhD in English from the University at Buffalo, The State University of New York after growing up in Chillicothe, Ohio. She received the 2009 Hardison Poetry Prize from the Folger Shakespeare Library. Her first collection of poetry, Response, won her the National Poetry Series Award. She currently lives in Berkeley, California.

In Nature’s Wake: The Art and Politics of Environmental Crisis | March 24, 2015
Nature Poetry After Nature