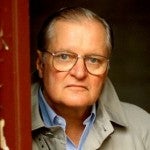 John Ashbery was born in Rochester, New York in 1927. His Notes from the Air: Selected Later Poems (Ecco/HarperCollins, 2007) won the 2008 Griffin International Prize for Poetry. The Landscapist, his collected translations of the poetry of Pierre Martory, was published in 2008 by Sheep Meadow Press and was nominated for the National Book Critics’ Circle Award for Poetry. The Library of America published the first volume of his Collected Poems in fall 2008. Planisphere, his latest volume of new poetry was published by Ecco/HarperCollins in December 2009.

You meant more than life to me. I lived through
you not knowing, not knowing I was living.
I learned that you called for me. I came to where
you were living, up a stair. There was no one there.
No one to appreciate me. The legality of it
upset a chair. Many times to celebrate
we were called together and where
we had been there was nothing there,
nothing that is anywhere. We passed obliquely,
leaving no stare. When the sun was done muttering,
in an optimistic way, it was time to leave that there.

Blithely passing in and out of where, blushing shyly
at the tag on the overcoat near the window where
the outside crept away, I put aside the there and now.
Now it was time to stumble anew,
blacking out when time came in the window.
There was not much of it left.
I laughed and put my hands shyly
across your eyes. Can you see now?
Yes I can see I am only in the where
where the blossoming stream takes off, under your window.
Go presently you said. Go from my window.
I am in love with your window I cannot undermine
it, I said.