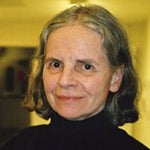 Educated at the University of Illinois, Urbana, and Georgetown University, Joan Retallack is the recipient of the Columbia Book Award, a National Endowment for the Arts grant, the Pushcart Prize and the Gertrude Stein Award in Innovative American Poetry, and several other honors. Retallack has written critical, poetic, and artist pieces. Her artistic work has been exhibited in New York, Washington, D.C., and Philadelphia. Her titles include Memnoir, which was translated into French, How to Do Things With Words, Gertrude Stein: Selections, and Errata 5uite. She is the John D. and Catherine T. MacArthur Professor of Humanities at Bard College.

The Magic Rule of Nine

Your sonic suit may not be a perfect fit. You’ll learn to
get by. Just don’t assume that all art is all about victory
over death all the time. Not to say one shouldn’t enjoy
not being dead. In the swell of many a meantime,
many have been known to divert themselves with great
success viz. civilizations’ greatest hits. Take the
discovery of “The Magic Rule of Nine.” That the
sums of all the numbers within the sums of all the
multiplicands of 9 up to and including 9 equal 9 is
numerically melodious (bird singing in tree) to the
species that longs for more to it than a first glance
affords. Someone will say if you really think this is
magic you don’t properly understand the decimal
system (bird falls out of tree). Who among us doesn’t
long for magic. Who among us understands the
decimal system.