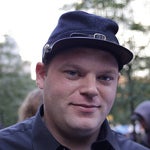 Jesse LaGreca is a freelance writer for Daily Kos who has gain media attention and support courtesy of his role in the Occupy Wall Street Movement. In an interview with Fox News, LaGreca caught the anchor off guard by articulately criticizing the corporate media and Fox News. Although Fox News never aired the video, the raw footage went viral, making LaGreca the face of the Occupy Wall Street Movement. Since Fox News, Jesse LaGreca has made numerous appearances on television talk shows ABC’s “This Week” with Christiane Amanpour and MSNBC’s The Ed Show with Ed Shultz.

from Down and Out in Brooklyn and Queens

New York, I love you, but you’re freaking me out.

I’ve been working full time and trying to find a place to live that I can afford and it is going nowhere. Bouncing back and forth between Brooklyn and Queens, spending untold amounts of time looking on Craigslist for a room to rent that I can afford, it’s just exhausting and to some unavoidable extent demoralizing.

I have money saved for a room to rent. Finding a room in NYC that I can afford on my regular income has been a massive trial. Frankly, I have no idea how anyone affords to live in New York without making at least $15 an hour or more. This game is rigged, and I feel like a fool for continuing to play a game that I know is rigged and I can’t win.

—
Continue reading “Down and Out in Brooklyn and Queens” at Daily Kos.