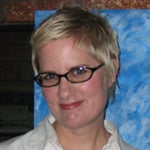 Born and raised in San Diego, editor and poet Jennifer Moxley was educated at the University of California, San Diego; The University of Rhode Island; and Brown University, where she earned her MFA. She has written several collections of poetry, including The Line and Clampdown, as well as a memoir, The Middle Room. Moxley has also translated many books. Her work has appeared in Best American Poetry and American Hybrid: A Norton Anthology of New Poetry, among others. Moxley received the Denver Quarterly’s Lynda Hull Award in 2005.

The Atrophy of Private Life

In the heavy fashion magazines strewn here and there around the house the photos of objects and people mouth the word “money,” but you, assuming no one wants you anymore, mishear the message as “meaning.” Arousal follows. The lives of the rich are so fabulous! The destruction of the poetical lies heavily on their hands, as on their swollen notion that we are always watching. There is nothing behind the mask. Nothing suffocating under its pressure, no human essence trying to get out.
Awareness, always awareness. Don’t you see how these elaborate masks are turning you into a zombie? The private life is not for the eye but for the endless interior. It is trying to push all this crap aside and find the missing line. Nobody, least of all the future, cares about the outcome of this quest.
It is easy to lose, through meddling or neglect, an entire aspect of existence. And sometimes, to cultivate a single new thought, you need not only silence but an entirely new life.