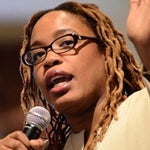 Heather McGhee is the Director of Demos’ Washington office, where she develops and executes strategy for increasing the organization’s impact on federal policy debates in Washington. Previously, she was the Deputy Policy Director, Domestic and Economic Policy, for the John Edwards for President 2008 campaign, and a Program Associate in Demos’ Economic Opportunity Program. Her writing and research on debt, financial services regulation, retirement and inequality have appeared in numerous outlets, including the Wall Street Journal, USA Today, the Detroit Free-Press and CNN. She is the co-author of a chapter on retirement insecurity in the book Inequality Matters: The Growing Economic Divide in America and its Poisonous Consequences (New Press, 2005). She holds a B.A. in American Studies from Yale University and a J.D. from the University of California at Berkeley School of Law.

From Our Diverse America Deserves a More Representative Democracy

When Congress narrowly missed another government shutdown in December by passing the “cromnibus” bill, much of the press coverage focused on Capitol Hill’s ongoing dysfunction. However, buried inside the bill was yet another blow to campaign finance regulations, dramatically increasing the amount of money donors can give to political parties. A single couple can now give up to $3.1 million to a political party over a two-year election cycle, a six-fold increase.

Less than 1 percent of 1 percent of people have the means to take advantage of these eased rules, and therein lies the danger. This disparity means that most Americans lack the political capital to influence the policy decisions that affect their lives.

Blueprint for Accountability | March 27, 2012
The Morning After