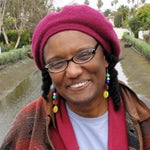 Harryette Mullen earned degrees in English and literature form the University of Texas at Austin and the University of California, Santa Cruz. She has worked in the Artists in Schools program, which is sponsored by the Texas Commission on the Arts. She has written numerous books of poetry, among them Muse & Drudge, S*PeRM**K*T, and Tree Tall Woman. Her works have received a PEN Beyond Margins Award and have been named finalists for the National Book Award, the National Book Critics Circle Award, as well as the Los Angeles Times Book Award in poetry. She was also the 2009 recipient of the Academy of American Poets Fellowship. Harryette Mullen teaches African American literature and creative writing in the English Department at the University of California, Los Angeles.

Wipe That Simile Off Your Aphasia