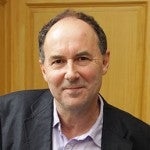 Harry Clifton was born in Dublin, but has lived in Africa and Asia, as well as more recently in Europe. He has published five collections of poems in Ireland and the United Kingdom, including The Liberal Cage (1988) and The Desert Route: Selected Poems 1973–1988 (1992).

Only here, at the head of a pack of hounds
In a tenement room, on a patch of waste ground

Abandon her forever or a while
To wander the forest of cities, like a child

Suckled on wolf’s milk, smelling of dog,
Unable to defend herself, or beg

In a common language. Knowing the Word
But no grammar. Panting in surds

At the packs of the concerned – the half-sisters,
Half-brothers, cloned from the masters,

Finding her where they left her, curled
In the forgotten corner of a lost, unfallen world.