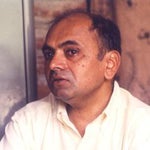 Dr. G. N. Devy retired as Professor of English from M. S. University in Baroda in 1996 to devote himself full time to tribal development. An accomplished scholar, he has since become an effective activist for tribal autonomy and cultural renewal. Major publications include After Amnesia: Tradition & Change in Indian Literary Criticism (1992), Of Many Heroes: An Essay on Literary Historiography (1997), India between Tradition and Modernity (1997), Adivasi Jane Chhe (The Tribal Knows) (2001), and For a Nomad Called Thief (2006).

Devy is General Editor for a 50 volume series on Literature in Indian Tribal Languages under the Sahitya Akademi Project, and has authored approximately 120 research articles in journals and anthologies in India and outside India. He contributes frequently to newspapers and has founded and edited three magazines: Setu (English & Gujarati), A Journal of Literary Translation 1983-90, and Dhol: A Journal of Tribal Dialects. He has received numerous awards, including the 1992 Katha Award for Translation, 1999 Gunther Sontheimer Award for Innovative Cultural Work, and 2001 SAARC Literary Award for Innovative Contribution to Literature and Social Reform. He has founded several institutions, among them, Bhasha Research & Publication Centre for the study of Tribal Languages, Literature and Arts and Denotified & Nomadic Tribes Rights Action Group.