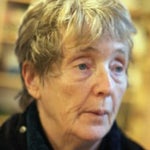 Fanny Howe held the Lannan Chair in Poetry at Georgetown University for 2010-2012. Irish-American poet, novelist and essayist, she is among the most widely read of experimental writers. Howe is the author of more than twenty books and the recipient of numerous awards, including the 2009 Ruth Lilly Prize from the Academy of American Poets and the 2001 Lenore Marshall Poetry Prize. She has also won awards from the National Endowment for the Arts, the National Poetry Foundation, the California Council for the Arts, and the Village Voice, as well as fellowships from the Bunting Institute at Radcliffe. Her most recent collection of poetry Second Childhood was published by Graywolf Press. She is currently a Visiting Writer at Brown University.

The Advance of the Father

From raindrenched Homeland into a well: the upturned animal
was mine by law and outside the tunnel, him again!
Everywhere I turned the children ran between. “Loose dogs!”
he roared. I remember one sequence: a gulf in his thinking
meant swim as fast as you can. But it was winter and the water
was closed. The mouths of the children were sealed with ice.
After all, we were swimming in emotion, not water.

Inverted tunnel of the self.
Throat or genital search for the self.
Light that goes on in the self when the eyes are shut.
Uniformity impossible in the psyche’s pre-self
like a day never spent, or how the unseen can make itself felt.

It was as if a boy was calling from the end of a long island.
Docks were vertical and warlike.
I would be on one side of my bed like a mother who can tell
she’s a comfort because she’s called Mother.
Still, we both would be able to see the edge of the problem.

It’s true that the person is also a thing.
When you are running you know the texture. I was clawing
at the palm of one hand and brushing up my blues with the other.
A man who wore his boxers at night remarked that my daughter
was tired. He had nothing to do with anything.

Ahead was the one with magnified eyes and historical data to last.
Know-how and the hysteria to accomplish his whole life.
It was horrible what we would do for peace.
We told him the story of the suffering he made us feel
with the ingratiating stoop of those who came second in the world.