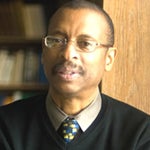 E. Ethelbert Miller is an activist and poet born in New York City in 1950. Miller is the author of several collections of poems and “arguably the most influential person in Washington’s vast and vibrant African American arts community,” according to The Washington Post.

His last book, How We Sleep On The Nights We Don’t Make Love (2004), was an Independent Publisher Award Finalist; and his other awards and honors include the Columbia Merit Award, the O.B. Hardison Jr. Poetry Prize, and the 2007 Barnes & Noble Writers for Writers Award presented by Poets & Writers. Educated at Howard University, he was awarded an honorary doctorate of literature from Emory & Henry College in 1996. In 2003, his memoir Fathering Words: The Making of An African American Writer (2000), was selected by “DC We Read” for its One Book, One City program sponsored by the District of Columbia Public Library, and in 2004, Miller was awarded a Fulbright to visit Israel. Miller is the former chair of the Humanities Council of Washington, D.C. and a former core faculty member of the Bennington Writing Seminars at Bennington College. Since 1974, he has been the director of the African American Resource Center at Howard University. He is a board member of The Writer’s Center and editor of Poet Lore magazine, and is often heard on National Public Radio (NPR). Miller lives in Washington, D.C., with his family.