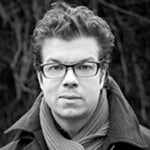 Born and raised in Topeka, Kansas, Ben Lerner is the author of three books of poetry: The Lichtenberg Figures, Angle of Yaw, and Mean Free Path. He has been a finalist for the National Book Award, the Northern California Book Award, the Los Angeles Times Book Prize, and The New York Public Library’s 2012 Young Lions Fiction Award. Lerner was also a Fulbright Scholar in Spain and the recipient of a 2010-2011 Howard Foundation Fellowship. In 2011 he became the first American to win the Preis der Stadt Münster für Internationale Poesie. His debut novel, Leaving the Atocha Station, was named one of the best books of 2011 by The Wall Street Journal, The New Yorker, The Guardian, The Boston Globe, New York Magazine, and many others.

From The Lichtenberg Figures

In my day, we knew how to drown plausibly,
to renounce the body’s seven claims to buoyancy. In my day,
our fragrances had agency, our exhausted clocks complained
so beautifully
that cause began to shed its calories

Now I am the only one who knows
the story of the baleful forms
our valences assumed in winter light. My people, are you not

horrified of how these verbs decline—
their great ostentation, their doors of different sizes?

–
Continue reading The Lichtenberg Figures at The Paris Review.