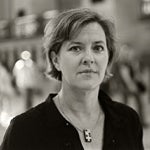 Elizabeth Robinson is the author of eight collections of poems and a three-time recipient of the Gertrude Stein Award for Innovative American Poetry. Her most recent work, Under That Silky Roof (2006), explores the interplay of domestic life, focusing on topics such as companionship, its fecundity and its losses. Robinson also ventures into the manifestations of the abstract, what she calls “the brick floor from which the kingdom of God extends or could extend.” Two of her recent titles, Apprehend (2003) and Pure Descent (2003), were recognized with the Fence Modern Poetry Series award and the National Poetry Series award, respectively. Educated at Bard College, Brown University, and Pacific School of Religion, Robinson has taught at the University of San Francisco, and San Francisco State University.

Her work has appeared in the Colorado Review, the Denver Quarterly, and New American Quarterly, among others. Her writing has also been featured in numerous anthologies including Writing from the New Coast, Poètes Américains, and American Poetry: The Next Generation. In addition to writing, she serves as co-editor of 26, a magazine of poetry and poetics, and EtherDome Press, which publishes chapbooks by emerging women poets. Robinson is currently an assistant professor of English at the University of Colorado.

“Willy nilly runs the river
Without an original edition.”

I think about death
and so it appears, like a ghost with legs of uneven length.

Each step makes a noise, an uneven chatter
that turns just outside the window of my mind like a brook.

No, I am not troubled by this visitation because
death is a facsimile, a fundamental

I bestow on so earnest an attempt at imitation. I imitate it
myself, with an accommodating stumble.

The susurrus of death tells me that nothing is cleanly divisible,
that life is a current that wends crookedly.

But the ghost beguiles and I cannot resist putting my hands in,
wrist-deep, pulling apart where I reach, finally, the stream

of the original,
the prime number, the place where parting cannot occur.