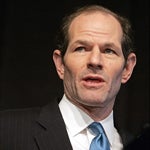 Eliot Spitzer attended Harvard Law School and worked his way up in the Manhattan District Attorney’s office. He was elected New York Attorney General in 1998. As attorney general, Spitzer made a name for himself as a crusading prosecutor. Not only did he lock horns with the Gambino Mafia crime family, he also became known as the “Sheriff of Wall Street.” In May 2002, he won a spectacular victory when he uncovered emails revealing that Merrill Lynch was riddled with financial conflicts of interest that affected its advice to customers. Merrill Lynch settled out of court for $100 million. Known for his strict ethics and persistence, Spitzer was elected governor in 2006.