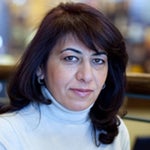 Dunya Mikhail was born in Baghdad. She fled her country after being placed on Saddam Hussein’s list of enemies. She has published four collections of poetry in Arabic and one in English, including The Psalms of Absence, Almost Music and The War Works Hard. In 2001, she won the U.N. Human Rights Award for Freedom of Writing.

How magnificent the war is!
How eager
and efficient!
Early in the morning,
it wakes up the sirens
and dispatches ambulances
to various places,
swings corpses through the air,
rolls stretchers to the wounded,
summons rain
from the eyes of mothers,
digs into the earth
dislodging many things
from under the ruins…
Some are lifeless and glistening,
others are pale and still throbbing…
It produces the most questions
in the minds of children,
entertains the gods
by shooting fireworks and missiles
into the sky,
sows mines in the fields
and reaps punctures and blisters,
urges families to emigrate,
stands beside the clergymen
as they curse the devil
(poor devil, he remains
with one hand in the searing fire)…
The war continues working, day and night.
It inspires tyrants
to deliver long speeches,
awards medals to generals
and themes to poets.
It contributes to the industry
of artificial limbs,
provides food for flies,
adds pages to the history books,
achieves equality
between killer and killed,
teaches lovers to write letters,
accustoms young women to waiting,
fills the newspapers
with articles and pictures,
builds new houses
for the orphans,
invigorates the coffin makers,
gives grave diggers
a pat on the back
and paints a smile on the leader’s face.
The war works with unparalleled diligence!
Yet no one gives it
a word of praise.