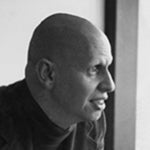 Poet, artist, and critic David Antin received an MA in linguistics at City College of New York, where he studied with Gertrude Stein. David Antin invented a genre: the talk poem. Combining lecture, story-telling, lyric intensity, improvisational reach, and memoir, his performances lead to unexpected avenues of social commentary even for the poet, since they do not rest upon any prior text. He has performed his pieces at the Whitney, Guggenheim, and the Museum of Modern Art, among other venues. Emerging in the decade of the New American Poetry, he was one of the earliest critics to write on postmodernism, and his work makes it meaningful to speak still of an American avant-garde. His published books include Talking at the Boundaries, After the War (A Long Novel with Few Words), Tuning, and What It Means to Be Avant-Garde.