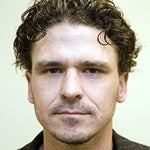 Dave Eggers is the author of six books, including Zeitou, a nonfiction account a Syrian-American immigrant and his extraordinary experience during Hurricane Katrina, and What Is the What, a finalist for the 2006 National Book Critics Circle Award about Valentino Achak Deng, a survivor of the civil war in southern Sudan.

Eggers is the founder and editor of McSweeney’s, an independent publishing house based in San Francisco, and the co-founder of 826 Valencia, a nonprofit writing and tutoring center for youth in the Mission District of San Francisco. Local communities have since opened sister 826 centers in Chicago, Los Angeles, Brooklyn, Ann Arbor, Seattle, and DC. In 2004, Eggers taught at the University of California-Berkeley Graduate School of Journalism, and there, with Dr. Lola Vollen, he co-founded Voice of Witness, a series of books using oral history to illuminate human rights crises around the world.

My God, Mae though. It’s heaven.

The campus was vast and rambling, wild with Pacific color, and yet the smallest detail had been carefully considered, shaped by the most eloquent hands. On land that had once been a shipyard, then a drive-in movie theater, then a flea market, then blight, there were now soft green hills and a Calatrava fountain. And a picnic area, with tables arranged in concentric circles. And tennis courts, clay and grass. And a volleyball court, where tiny children form the company’s day care center were running, squealing, weaving like water. Amid all this was a workplace, too, 400 acres of brushed steel and glass on the headquarters of the most influential company in the world. The sky above was spotless and blue.

Mae was making her way through all of this, walking from the parking lot to the main hall, trying to look as if she belonged. The walkway wound around lemon and orange trees, and its quiet red cobblestones were replaced, occasionally, by tiles imploring messages of inspiration. “Dream,” one said, the word laser-cut into the stone. “Participate,” said another. There were dozens: “Find community.” “Innovate.” “Imagine.” She just missed stepping on the hand of a young man in a gray jumpsuit; he was installing a new stone that said, “Breathe.”

Continue reading The Circle at The New York Times Magazine.