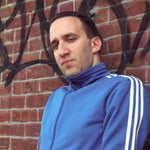 Danny Hoch was born in 1970 in Brooklyn, New York. He is an actor, playwright and director who The New York Times called “part sociologist, part moralist, and part super-chameleon, possessed of both sharp observational distance and bone-deep empathy.” His plays Pot Melting (1991), Some People (1994), and Jails, Hospitals, & Hip-Hop (1997), have garnered many awards including two Obie Awards, an NEA Fellowship, and a Tennessee Williams Fellowship. Hoch’s writings on hip-hop, race, and class have appeared in The Village Voice, The New York Times, Harper’s, The Nation, and American Theatre. His many writing and acting credits include Bamboozled, The Thin Red Line, Whiteboys, HBO Def Poetry, and We Own the Night (2007).

In 2000 Hoch founded the Hip-Hop Theater Festival, which has since presented over 75 hip-hop generation plays from all over the world and now appears annually in New York, Chicago, Washington, D.C., and San Francisco/Oakland. Hoch is the recipient of a 2006 Creative Capital Grant and the 2007 Sundance Theatre Lab’s Playwright-in-Residence. He is a Senior Fellow at the New School’s Vera List Center for Art & Politics and sits on the boards of the Theatre Communications Group and the Hip-Hop Theatre Festival.