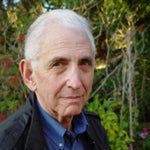 Daniel Ellsberg is a former United States military analyst who released the Pentagon Papers in 1971 after having worked at RAND Corporation and serving in Vietnam. In 2006 he received the Right Livelihood Award and in 2012 became a co-founder of the Freedom of the Press Foundation, which was created to fund and support free speech and freedom of the press.

from Secrets: A Memoir of Vietnam and the Pentagon Papers

On Tuesday morning, August 4, 1964, my first full day on my new job in the Pentagon, a courier came into the outer office with an urgent cable for my boss. He’d been running. The secretaries told him Assistant Secretary John McNaughton was out of the office; he was down the hall with Secretary of Defense Robert McNamara. They pointed him to me, his new special assistant. The courier handed me the cable and left. It was easy to see, as I read it, why he had been running.

It was from Captain John J. Herrick, the commodore of a two-destroyer flotilla in the Tonkin Gulf, off North Vietnam in the South China Sea. He said he was under attack by North Vietnamese patrol boats and had opened fire on them. He was in international waters, over sixty miles off the coast of North Vietnam. One torpedo had been heard by the sonarman on his command ship, the USS Maddox, and another had just passed by the other destroyer, the Turner Joy.