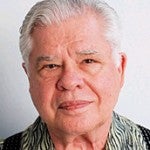 Known for his work as a poet, editor, and translator, Clayton Eshleman has been awarded the National Book Award and grants from the National Endowment for the Arts. His career-long effort translating Vallejo from Spanish culminated in Eshleman’s 2006 publication, The Complete Poetry of Cesar Vallejo, A Bilingual Edition.

Patters, paters, Apollo globes, sound
breaking up with silence, coals
I can still hear, entanglement of sense pools,
the way a cave might leak perfume–

in the Cro-Magnons went, along its wet hide walls,
as if a flower in, way in, drew their leggy
panspermatic bodies, spidering over
bottomless hunches, groping toward Persephone’s fate:
to be quicksanded by the fungus pulp of Hades’ purple hair
exploding in their brains.

They poured their foreheads into the coals and corrals
zigzagged about in the night air–
the animals led in crossed
a massive vulva incised before the gate,
the power that came up from it was paradise, the power
the Cro-Magnons bequeathed to us:
to make an altar of our throats.

The first words were mixed with animal fat,
wounded men tried to say who did it.
The group was the rim of a to-be-invented wheel,
their speech was spokes, looping over,
around, the hub of the fire, its silk of us,
its burn of them, bop we dip, you dip,
we dip to you, you will dip to us, Dionysus
the plopping, pooling words, stirred
by the lyre gaps between the peaks of flame,
water to fire, us to them.

Foal-eyes, rubbery, they looped
back into those caves whose walls could be strung
between their teeth, the sticky soul material pulled to
The sides by their hands, ooh
what bone looms they sewed themselves into, ah
what tiny male spiders they were
on the enormous capable of devouring them
female rock elastic word!