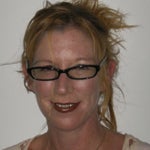 After leaving college to waitress in San Fransisco, Creedon eventually received her MA from Smith College before earning her MFA from the University of Virginia. She has received the Glascock Poetry Prize, the Alehouse Happy Hour Poetry Prize and the Academy of American Poets prize and was a runner-up for the 2008 Study Abroad Programs in Arts and Writing Contest. Her work has appeared in Ploughshares, Massachusetts Review, and The Best of the Best American Poetry, among others. Creedon lives in Charlottesville, Virginia, with her husband and dog.

How to Be a Cowgirl in a Studio Apartment

Paint the ceiling blue and let it dry. See pamphlet “How to Paint a
Ceiling.” Chalk a large circle to represent the sun. A light bulb will
do as well. Start close to the sun and trace Mercury. Trace each
planet. Finish with Pluto. Pour each color into a plastic container.
Paint each planet and the sun.

—from anonymous pamphlet, “How to Paint
the Solar System on Your Ceiling”

Don’t let the people at Ace Hardware tell you you need a man.
Do pick one up anyway, if he looks red and ripe. A cowgirl needs
nourishment, and some nights, to lie on her back and let something
bloom above her, looming like the stars. A cowgirl’s hardware
is indispensable—big-spurred boots, canteen, and a saddle to go—
useful, but always that soft underbelly she won’t be revealing.
No need for the little black dress: a flannel shirt, jeans, a steaming
pan of wieners, and some bourbon. And him, over there. “Hey You!”
He’ll come over. He’ll have to. You’re a renegade, a rough ride, a rogue feeling.
Paint the ceiling blue and let it dry. See pamphlet “How to Paint a Ceiling.”

Get him there. Rein him in a little; don’t let him roam too much.
You’re well-schooled in herding. Circle him, if you must, with a lasso,
then lead him—carry him, if you must, over one shoulder—over
his objections, over a bottle of wine, to the bed. Make him docile.
Hum like a whittled banjo. It helps if you know how to pet a wild
animal, or how to rub two sticks together with your hands, or shell
peanuts husk by husk—cowgirl skills that will come in handy when
rustling up blades of grass to whistle on, or handling unpredictable
forces that scare so easily. Undo his fly. Make him rise and swell.
Chalk a large circle to represent the sun. A light bulb will do as well.

Remember, he’s borrowed, cowgirl; you don’t buy things, the stars
you ride under slide over you like yellow peanuts, the big sky just
a rented ceiling, the big sun a borrowed bulb, a giant library card
from God. The planets unmoored are not your marbles, and the warm
man you rolled with, rode and sweated with, will go back to his natural
habitat, glistening wet. This is your rule: the cowgirl’s status quo.
Bowls are only good for what they hold, branches for the scratch they
itch, stones for chalking circles of the light. Even your rope just
rings out the moon, your banjo mouth twangs out a temporary tempo.
Start close to the sun and trace Mercury. Trace each planet. Finish with Pluto.