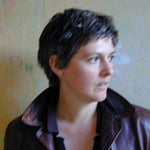 Caroline Bergvall is a poet and performance artist based in London, England. Books include: Goan Atom (Krupskaya, 2001) and Eclat (Sound&Language, 1996). Her most recent collection of poetic and performance pieces, FIG (Goan Atom 2), was recently published and her CD of readings and audiotexts Via: poems 1994-2004 (Rockdrill 8 ) is available through Carcanet.

As an artist, she has developed text performances as well as collaborative pieces with sound artists, both in Europe and in North America, of which the installation Little Sugar for TEXT Festival (Bury, 2005) and Say: “Parsley” at the Liverpool Biennial (2004). Her critical work is largely concerned with emerging forms of writing, plurilingual poetry and mixed media writing practices. She is co-Chair of the MFA Writing Faculty, Milton Avery School of the Arts, Bard College (NY) and Research Fellow at Dartington College of Arts (Devon).

From About Face (ongoing)