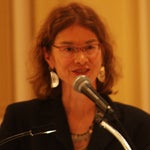 Among the awards Hillman has received are the 2005 William Carlos Williams Prize for poetry, and Fellowships from the National Endowment for the Arts and the Guggenheim Foundation. Hillman serves on the faculty of Saint Mary’s College in Moraga, California, where she teaches in the undergraduate and graduate programs, and she is also a member of the permanent faculties of Napa Valley Writers’ Conference and of Squaw Valley Community of Writers. Hillman is also involved in non-violent activism as a member of the Code Pink Working Group in the San Francisco Bay Area. She is married to poet Robert Hass.

Hillman has been increasingly interested in the innovative and experimental lyric traditions, particularly in how the Romantic concepts of nature and spirit have manifested in contemporary poetry. In her essay entitled “Split, Spark, and Space,” Hillman writes about the emergence of different kinds of lyric impulses in her writing: “The sense of a single ‘voice’ in poetry grew to include polyphonies, oddly collective dictations, and the process of writing itself. This happened in part because of a rediscovered interest in esoteric western tradition and in part because I came to a community of women who were writing in exploratory forms. …A poetic method which had heretofore been based on waiting for insight suddenly had to accommodate process, and indeterminate physics, a philosophy of detached looking.”

Infinity lifted:
a gasp of emeralds.

I thought I felt
the tall night trees
between them,

no exactitude,
a wait not even
known yet.

I held my violet up;
no smell.
It made a signal squeak
inside, bats,

ah, their little things,
their breath: lungs of a painting,

they swept me
in four ways, their square
plans, as I have made
a good square saying,

ritual of hope
whose weight
has not been measured—