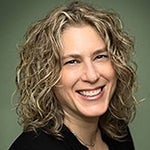 Betsy Andrews is the author of The Bottom, which won the 42 Miles Press Poetry Prize, and New Jersey, which received the Brittingham Prize in Poetry. Her chapbooks include She-Devil, In Trouble, and Supercollider, which was a collaboration with artist Peter Fox. Her writing has appeared widely in publications ranging from Fence, Stone Canoe, and Phoebe to the Yemeni newspaper Culture. She is a graduate of the MFA program in poetry at George Mason University. Betsy is also the executive editor of Saveur magazine. She has taught numerous courses on poetry and creative writing as well as food writing.

Atop the bottom, the water-ghost
the riddle-ghost tower, fireballs lapping the ghost map
the ghost nets, the ghost moon, the ghost lines, the ghost traps,
the fingerlings giving up ghost
the long dark drive, the ghost drive, over the derelict moat
the ghost era’s ghost-dish, its secrets, its swallows,
its test site’s thousand ghost bites named for rivers
and ice caps and nautical terms, for fish and for towns named for ghost
the long-gone ghost of the beaver meadow, Las Vegas they called it, skinned
ghost wagers streaming in
the once-and-again wealth of the nation a tour-tram parking lot coast
ghost of the barnacled schoolroom, lesson a nibbling ghost
In the hook-and-sink daybreak
at the ghost-black terminal, its scaffolds and catwalks and ladders and berths,
gunships its ghost-and-ghost host,
a borne-again freighter named Universal Hope is suckling, is guzzling up the ghost
in the cold commons’ ghost mouth, a trio of pearls,
three itches enraptured by ghost
the narwhal the sea cow the sea mink the monk seal a mouthful of ghost word, extinct
the half-seas’ coral a ghost story written in bone-white ink
The king counts his ghostlands,
his wrecks and his flotsam, his jetsam, his water-strays, his fishes.
My wish is: We are on the shore, we are looking out at the water.
You are lying beside me, curled.
The sun is coming up. I am turning you over
I am going to see your face
The sun is coming up, I am turning you over
I am going to be able to see your face